Please enter your information below and one of our instructors will contact you ASAP to get you set up.

"Sticks and Stones" and Other Myths

When children come to us about a bully, it's always tempting to dust off those go-to phrases that our parents used when we were growing up.

"If what they're saying isn't true, then it doesn't matter."

"If you respond, they'll know they got a rise out of you."

"Stop being so sensitive. Ignore it."

"It's just kids being kids. They'll grow out of it."

"Sticks and stones may break your bones, but words can never hurt you."

All of these sentiments operate under one massive misconception: that we, as humans, can turn our emotions on and off easily, as needed. A person who has never had to deal with bullying will have a hard time understanding why kids are especially bad at ignoring and dismissing them. Expecting them to do so naturally is totally unfeasible.

A lack of response isn't a guaranteed way for a child to protect themselves from bullying, anyway. Some bullies enjoy searching a person's face and body language for the smallest shred of evidence that what they're doing is working, which means that even walking away or avoidance can be a type of positive reinforcement. So how can we help?

It's gotten so much media attention in the last few years that parents and teachers know, without a doubt, that bullying is a problem children face every day. We've even worked pretty hard to nail down a proper definition of bullying, where both malicious intent and duration (or, in other words, a pattern of behavior) must be present.

Now, we must define what bullying looks like, so we don't miss it if it happens right in front of us. Many adults—maybe even children—envision the cliché picture of kids slamming each other into lockers and taking lunch money. But if you're reading this, you know it's far more varied than that.

But what about exclusion? What about children making each other feel as though they have no value and nothing to offer, as though they are worthless and unlikeable? How can we spot that subtle but devastating storm as it is brewing, and catch it early?

These days, kids are discouraged from being quiet and shy. Society encourages them to go outside and play with other children, to participate in class, and to make friends even if they'd rather keep to themselves in a corner reading a book. I was this way as a child, and there were other students at school who responded by excluding me and pretending I didn't exist. They went out of their way to make me feel like I didn't have any friends, and that my personality was the reason for it.

Thankfully, this forced me to turn my attention and focus to other things—like art and horseback riding—and to interact with people and groups outside of school. I became involved with the Future Farmers of America, an agricultural group, and even took on a leadership role within the club. Before I knew it, I was confidently standing on a stage, running some of the events and having a great time.

I no longer saw myself as a shy, quiet girl who was bullied for having no friends. It was hard to care what the kids at school thought of me, because I had other things going on that made me feel good about myself. I didn't need anyone's validation anymore.

Love Yourself & Protect Each Other

Children cannot control a bully's actions, but they can certainly make themselves a target by putting off vibes of low self-worth. Some kids may not stand up to bullies or say anything in response because they already don't feel great about themselves, and that can attract long-term patterns of malicious behavior from others that are impossible for them to ignore.

It has always been my goal, as a martial arts instructor, to teach the children in our community to be more confident, more disciplined, and more respectful. It is critical that children be allowed to discover their own value and find a variety of things that make them feel good about themselves. Not only do bullies not want to mess with someone who is self-reliant and confident, but if bullying does occur, a self-assured child will have an easier time tuning it out and dismissing it.

It may take a little while for a child to figure out a good response to a bully, and they should know that they have protection during that time. Becoming bully-proof starts with a feeling of safety and security at home. Children must know that they are always supported by a group of people who love them and to whom they can reach out for reliable, reasonable backup as needed. They should know that their parents or guardians will assist them in whatever way is needed—physical protection, emotional comfort, and even by intervening if the situation calls for it. That will help them feel as though their physical safety and feelings are valued.

Teachers find themselves in an especially difficult position these days. Many can't effectively discipline kids, which means they can’t deal with conflicts with as much flexibility as parents. Though teachers may not have a lot of power when it comes to actively punishing bullies, they are instrumental in creating a classroom environment that is inhospitable to patterns of malicious intent.

It takes a lot of nerve for an insecure child to speak up when there's a problem, so it's important that their concerns are listened to and that teachers are responsive during those conversations. Dismissing the problem or acting disinterested will convince the child that they are not valued enough to deserve help. After listening to the problem and showing gratitude to the child for pointing it out, teachers may then choose to send the other kid to the office, talk to the parents, or deal with it in a more benign way, like making the bully compliment each of the other kids in the class.

It's also helpful to create an environment where children recognize and celebrate one another's successes, to praise each other and to be excited about the progress of other students.

In one of our martial arts classes, we occasionally hold little races across the floor to warm up and have some fun. Regardless of who got there first or last, each student turns to the person next to them and gives them a high five, and says, "You did a great job." So many children struggle with the anger of not winning or coming in first place, so this may not come naturally to many of them at first. Soon, it becomes automatic. They're praising one another, and looking one another in the eye: "You are good. You did good."

It's a testament to children's capacity for kindness and cooperation that they can genuinely encourage each other while still maintaining that competitive spirit. Not only do they feel a decreased need to engage or join in with bullying behaviors, they are also helping one another gain the confidence they need to exude self-assurance, and creating small networks of support in the process. This ensures that bullies are left on the outskirts of the social circle, instead of controlling who gets to come in. Pretty soon, kids in such an environment will realize that they have nothing to gain by harming one another. That is bully-proofing at its finest.

It's Easy to Start Your Training Today! 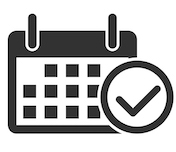 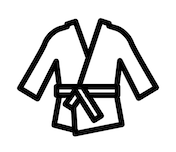 2. Check Out Our Trial Program For Yourself 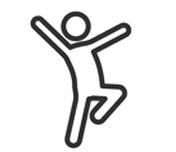 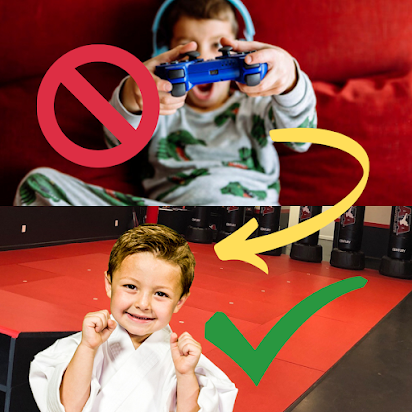 You know how kids spend hours every day on screens? And then they have trouble paying attention at school and home?

Our martial arts classes keep kids active so they can burn off that excess energy while developing discipline, confidence and respect.

What Students Say About Our School: 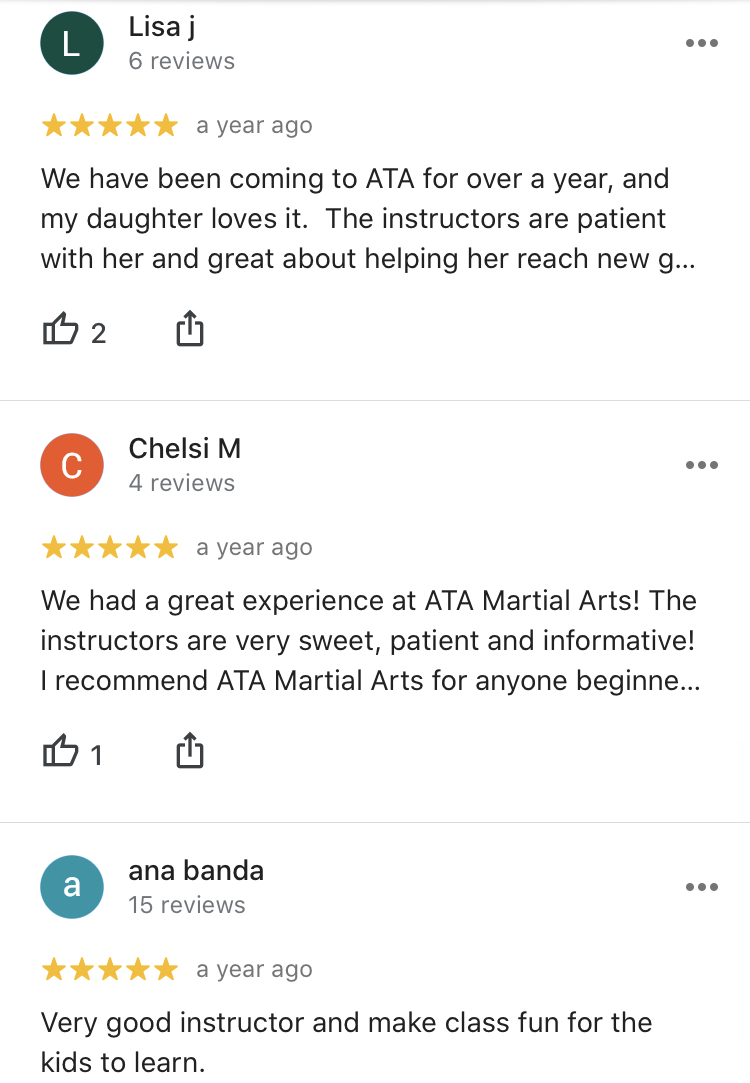 We Have Programs in Pittsboro & Chapel Hill

At ATA Martial Arts we know that you want your child to be an independent, successful adult.

In order to do that, you need your child to have skills for life. The problem is every day kids spend hours on their screens, causing them to be distracted at home and unfocused in school which makes you feel overwhelmed! We know you're trying to help them while juggling home and work responsibilities.

We believe you deserve to have a place you can bring your kids where you know each time you pick them up they'll be better prepared for a successful life at home and out in the world.

We understand that raising a child takes a village, and today you get to choose your village. This is why for decades our instructors have trained preschool age martial arts students to grow up to become successful adults.

Here's how we do it:

1) You schedule your first lesson

3) You watch your child succeed!

So schedule your trial lesson. And in the meantime, download our free guide on the 6 most important Life Skills a child needs for today's post-pandemic world.

So you can stop worrying your child is on the wrong path and instead know you've given them all the tools and skills to be a successful adult. 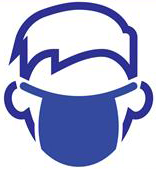 In adhering to current recommendations and/or requirements given by local government and health departments, we our current policy for our classes is as follows:

Policies are subject to change based on recent guidance. Please contact us directly for the most current class policy.